What Maria Kang Continues to get Wrong

If you read blogs or Facebook of HuffPo, you’ve probably heard of Maria Kang, even if you don’t know her by name. Kang is Internet famous for her “what’s your excuse” picture that went viral. The pictures was of Kang wearing a sports bra and work out short surrounded by her three very young children.

Plenty of articles were written in response to Kang’s picture as countless women tried to explain their lives and why Kang’s devotion to fitness wouldn’t work for them.

Kang posted a new picture earlier this month, detailing, again why there’s no excuses for not living her lifestyle and not having her body. After all, shes just like you. 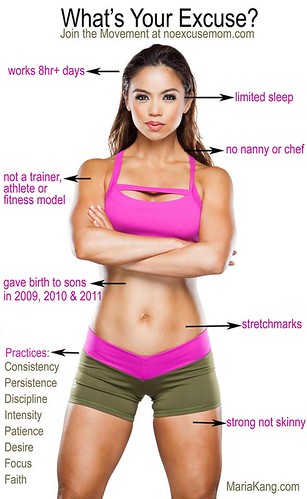 At this point, she’s planted herself into the “bless your heart” category.

What Maria Kang Doesn’t Get (and probably won’t, so this is pointless)

1. For some people there is no excuse, they just don’t share your priority of fitness. Period. End of discussion.  They don’t want to look like you or they have places they’d rather spend their time and efforts.  There is not one thing wrong with Maria Kang spending her time and effort at the gym.  Not a thing and beyond that, she does looks great and she’s obviously been successful.  The number of children you have, hours you work or help you don’t have doesn’t matter, though, if killing it at the gym isn’t your thing.

2. Maria Kang isn’t totally honest about her life and how she can achieve so much.  She wants you to think she’s Joe Average Mom.  Just like you!  She works 8 hours a day (at home and her husband is a stay at home dad).  She isn’t a personal trainer or a fitness model (but she IS getting paid to be fit.  She doesn’t have a nanny or cook, but what she does have is a full time partner supporting her in the home requiring not to need hired help. She has stretch marks! (that are photoshopped out of her glossy, professional publicity photos).

Somewhere, someone may read this and just think I’m a fatty hater that can’t stand a pretty skinny lady. That
seems to be the pat response when ever someone happens to suggest that maybe there is a very good reason why they can’t devote the same amount of time to the gym that Maria Kang does. Maria Kang is sleep deprived, too! Just like you! Except, not really. That’s really my whole problem with Maria Kang’s stance.I think it’s great that she’s seeking fitness in her life and in her family. I think it’s great that she’s leveraging a career based on something she obviously loves. But, I really don’t like her partial dishonesty regarding how she manages to do all of these things while asking you why you can’t. She’s disingenuous. I’d have a lot more respect for Maria Kang if she said “I’m super lucky to have a flexible work schedule and a full time partner at home to care for my children. Since I work from home, I do get to interact with my children during the day and that eases my guilt when I go to the gym. I’m lucky enough to be able to leverage my notoriety into paid work that eases my family’s financial burdens. Fitness and time at the gym is very important to me and I have a great support system that makes it all possible.”

Because the above is what the real truth is and I don’t think Maria Kang is ever going to get that point.  Her system is built on a foundation of privilege that many if not most families simply do not have.  Lack of money, time, support and resources are never “excuses”.

SHARE:
Tied Up 0 Replies to “What Maria Kang Continues to get Wrong”

So, This is Happening: Forty before Forty

So, This is Happening: Forty before Forty