The One Where We “Redshirted” our Kids

Earlier this month, Baby Bee started her third year of preschool. Baby Bee tuned five at the end of June and could have started Kindergarten this fall, but we decided last fall that there was just no way that Baby Bee would be ready for Kindergarten in a year, so with the support of her teachers and therapists, we decided to give Baby Bee one more year to catch up to her peers and another year that would allow, we hoped, more of her delays to melt away. 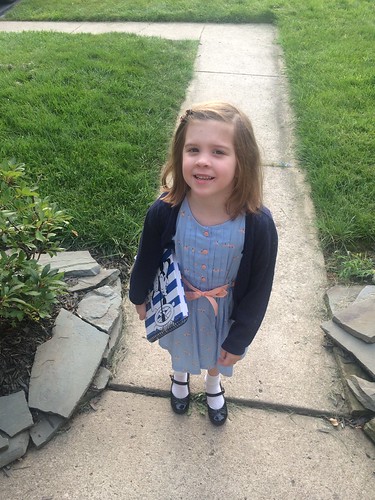 Baby Bee is not our first ride on the Kindergarten “redshirting” merry-go-round. We opted to “redshirt” Littlebit as well. I’ve wanted to write a post on this for a while, but Monday morning, I was sitting on the porch when an article about “redshirting” popped up on my Facebook newsfeed. Inside the PopSugar.com article was the following quote as given to the New York Times

I had typed up a response in the article comments that I let die. I figured there was more merit in explaining here why we opted to “redshirt” the two little girls and maybe it would help others make a hard decision. 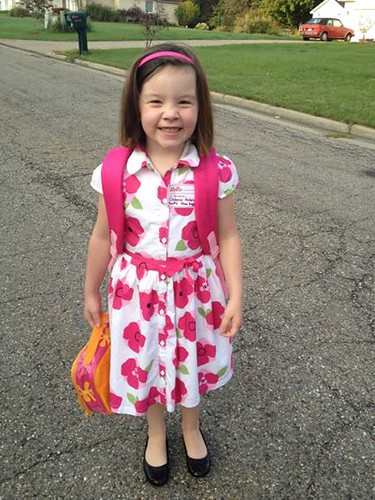 With Littlebit the decision to “redshirt” was very easy.  Our district has full day, all day Kindergarten and Big Daddy and I decided first that starting a program of that at four years of age (we have a 9/30 cut off and Littlebit has a 9/12 birthday) was just too much.   I thought an 8 hour day for a late four/early five was too much and I drew this conclusion from how the Princess adjusted to First Grade after her half day Kindergarten.  It was a tough, emotional, exhausting transition and I felt Littlebit was too young for it.  I don’t think that was about me, but maybe it was.

Secondary to that, was Littlebit’s delays.  She and Baby Bee have a similar diagnosis, a host of speech, physical and occupational delays.  Big Daddy and I hoped that one more year in her preschool program with supportive teachers and familiar therapists, at the very least, would not hurt Littlebit at all.  In truth, Littlebit exited ahead of the curve.  That was a very nice benefit and she is a very good student and has been.  I think she would have been successful had we not “redshirted” her, but I think she would have struggled more.  Littlebit is a very hard worker and I have no doubt that she would have worked had, but the extra year of preschool and therapies found Littlebit’s delays nearly vanished.  She finished with physical therapy her Kindergarten year and Occupational therapy her First grade her.  She’s still in speech therapy due to her “r” issue (pahk the cah in havahd yahd), but her speech therapist admits that he’d never take Littlebit on if he was called to evaluate her now.

When Littlebit was 3 her speech was assessed at being at a 12-14 month old level.  That tells you how far she’s come.

Then there was the matter of Baby Bee, who could be in Kindergarten this year at just over five years old.  I said above that we made the decision to hold her back a year ago.  Baby Bee, quite simply, needed the extra time.  It was obvious she was not a year away from Kindergarten.  She just wasn’t. We all knew it.  Big Daddy and I knew it.  Her teachers knew it.  Her therapists knew it.  When I approached her teacher at fall conferences and told her we wanted to hold Baby Bee back a year, she was visibly relieved.  Every professional connected to Baby Bee felt she needed an extra year of therapy in her preschool setting.

That wasn’t about me at all.

Do I believe that some parents hold their children back to give them an unfair advantage?  Oh, probably.  If you can imagine it, it can probably be true, but giving our children an unfair advantage was never our goal.  We just wanted them to be as successful as they could be and in this case it meant an extra year in their fantastic preschool where they could grow to their full potential before we moved them on.

So, should you “redshirt” your kid?  I’m not an expert, but I would consider the following criteria:

1) Is your child emotionally young?  Baby Bee is. Socially and emotionally.  Littlebit was not. This is absolutely something I would look at closely with “young five” boys. School definitely caters better to girls than boys, as boys tend to mature more slowly in matters of reading, writing and speech. I am not saying all boys will fall into this range, nor that age will even be a predictor.  I’m simply urging youto consider whether or not your child is emotionally ready for school.

2) Does your child have delays or other needs that might benefit from a little more catch up time?  For our girls?  Yes. My hope was to have both girls enter kindergarten on the same level as their peers.  I had no desire for them to be either ahead or behind.  Just equal (or close to it). If your child has different health concerns and delays, it’s really worth giving some thought to and be sure to ask the professionals in your child’s life.

3) Do you feel like the current Kindergarten schedule in your district might be too much for your child’s emotional and physical maturity?  My kids don’t nap, but if yours comes home from half day preschool and naps for two hours she may not be physically ready for a full day of Kindergarten.

4) What is your goal for delaying Kindergarten?  I mean, if it’s Football domination when he hits high school, you’re probably making the decisions for the wrong reasons

5) To reiterate a point I made above, what are the professionals involved with your child saying?  Your child’s preschool teacher has seen hundreds of children. Some preschools will administer a readiness assessment, but you can ask at any time if it’s time for Kindergarten or not.  They will be kind.  And honest.  They want the best start for your child, too.

SHARE:
The Littlest One, The Middlest 0 Replies to “The One Where We “Redshirted” our Kids”