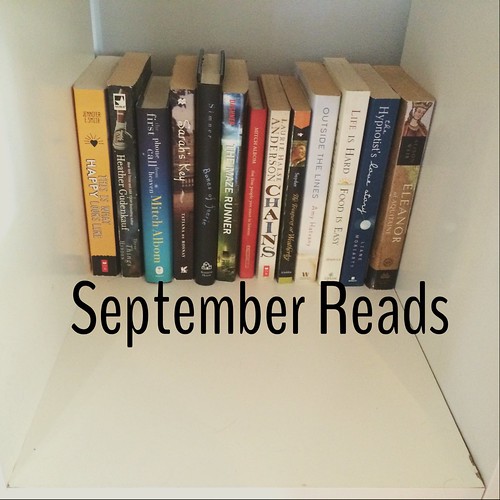 So, after I reminded everyone, last week, that I’m a reader, I realized that I needed to do a better job of sharing my love of reading with others. Reading can be a very solitary activity and it is one of the things I love most about it. I love the time I spend just me and a book. It’s refreshing and rejuvenating for me. 30 minutes of reading can cut stress. It will enhance your vocabulary, increase your ability to concentrate and will help you ability to comprehend complex materials and ideas.

Maybe you’re a Reader too and you’re searching for your next favorite book or maybe you’re not a reader at all (either anymore or ever) and you want to get into (or back into) the saddle. I’ve added six books to my “read in 2014” list this month and here are my favorites:

The Chaperone by Laura Moriatry. This book is loosely based around the life of Louise Brooks, a popular dancer and actress from the 1920’s. The book is really about the life of Louise’s chaperone, Cora Carlisle, a very proper woman from Louise’s hometown of Wichita, Kansas. Louise has been given a dance try out in New York City and Louise’s dysfunctional family determine that she’ll need a chaperone as she’s only 15. Cora has business in New York and agrees to accompany Louise.

The vast majority of the book deals with Cora’s summer in New York with Louise. It does follow Cora until her death, which I think was a mistake and the reason why I only gave it 4 stars. I think the ending drug out far longer than it needed to and a little more brevity would have made this a 5 star read.

The Wednesday Wars by Gary D. Schmidt.  This book is a 2008 Newbery Honor Book, meaning it was chosen as one of the best books for younger readers that year.  I do read books for “kids” and “young adults”.  There’s no shame in my game.  A good book is a good book and it doesn’t matter how thick it is or for whom it’s written.

Holling is a great character and you really begin to see him grow from a boy convinced his teacher is out to kill him, to a young man who is sympathetic and supportive to others.  Written during the end of Lyndon B. Johnson’s presidency, the undertones of war settle upon the book in a way that’s persistent, but not overwhelming.  This book would be a great option for more reluctant readers as it’s got some very good, relateable humor well interspersed with more serious themes.

All the Light we Cannot See by Anthony Doerr.  This book is probably going to be my Book of the Year ™
I don’t even know where to begin to talk about the wonderfulness that is this book. It’s written so well in flashback and flashforward and it’s full of rushing urgency and beautiful stillness. I know that sounds crazy, but it’s the truth.

Marie-Laure goes blind when she is six. With the help of her father, who is a key maker in Paris at the National Museum of Natural History, Marie-Laure learns to navigate her neighborhood and her life. When she is 12, the Nazis storm Paris nad Marie-Laure and her father escape to a small town on the sea called Saint-Malo. There they live with her eccentric, but wonderful, Uncle and his fiesty housekeeper. It is in Saint-Malo that the life of Marie-Larue intersects with a German soldier named Werner. Werner is young. Too young, really, to be at war but his genius ability to use and fix radios has won him not only a trip to the front, but an elite education that has taken him out of an Orphanage in a mining town in Germany.

I want to tell you that this is a love story, because it is, but it’s more than that. It’s a slice of history. It’s a mystery and it’s just about the most beautifully, gently written book I think I’ve ever had the pleasure of reading.

Best Books of the Year