The Mother of an Imaginative Child

Baby Bee chirps from the back seat as we drive, her little voice just a babble of sounds over the music.

“Mama!”, she calls out.
“What, baby?”, I ask catching her eye in the rearview mirror.
“I’m pawayin’!, she informs me, returning to whatever game involved someone named Mama. In the car, she takes off her shoes to involve in her game if a toy hasn’t been provided or isn’t in reach. They take fantastic trip over the window ledge and the seat back. She coos at them as if they were babies and then bark directions at them.

I am the mother of an imaginative child.

It’s always Pluto’s birthday! She cuts paper into tiny shapes that she wraps up into more paper and presents as gifts.

We spent nearly a full year being called by names other than our own and Baby Bee spent so much time and effort insisting she be referred to as Mickey Mouse that I started to worry about how that may be affecting her developmentally. She gave it up in the winter and I kind of miss her calling me “Deeesee” (Daisy).

Our house is a place of tableau. Nothing is exempt from being taken into Baby Bee’s fantastic world. 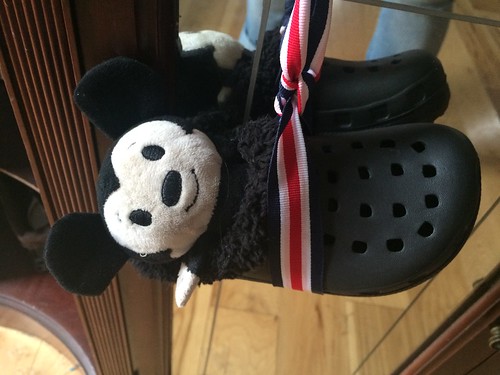 That is a tiny mouse in a tiny Croc hanging being suspended by Littlebit’s belt from the handle on the credenza.

All my children have imagined. I’ve played games with my voice Barbie squeaky high as Barbie drove off to the grocery store to buy bananas for her babies (any smaller toy would do regardless of brand or species). The Princess turned our bookcase into a dollhouse (she actually owned a dollhouse) but neither Littlebit or the Princess imagine like Baby Bee does. She stands alone there.

Being the mother of an imaginative child means playing “gotta say” for minutes upon minutes as she engages you in the exact game she wants you to play. It means that you must hold the wooden cookie in your hand and no one else may pretend to eat it. You are served pretend food on plastic plates before your eyes open all the way in the morning. You not only respond to your other name, but call your family members, house and car by their other name. You consider if your dog would actually come if you called for Pluto. You respond to anxious cries of “mama!” only to be shooed away because you interrupted a game you weren’t invited to. 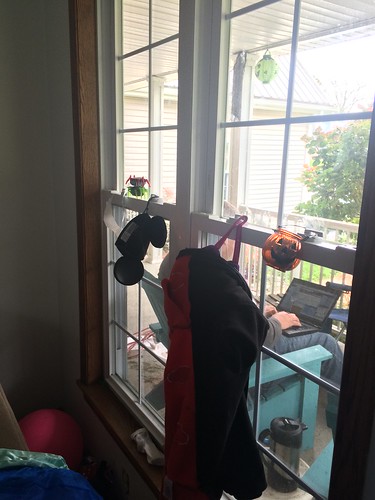 Yes, that window is missing curtains.  Why?  She was using them and pulled the bracket out.  It’s on Big Daddy’s to-do list.

It can be frustrating being the mother of an imaginative child.  She uses the curtains to wrap up her toys, the commandeers the ottoman to build a tent and no one is allowed to touch it. She gets upset of her elaborate playscapes are moved or touched.   Goodness help you if you don’t react or respond during one of her elaborately scripted games.

But, being the mother of an imaginative child is usually full of enough sweet and funny moments that it more than makes up for being yelled at for consuming your pretend cookie too soon.

SHARE:
The Littlest One 0 Replies to “The Mother of an Imaginative Child”