I’m thinking I’m not going to make it.

But, I’m okay with that. Really. The average American only reads 17 books a year and I’m way ahead of that curve.  I read 14 books in the month of October.  So, which were my favorites? 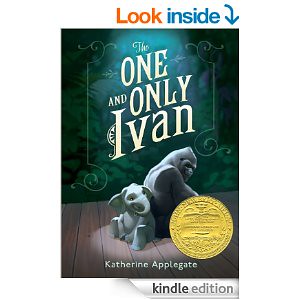 The One and Only Ivan by Katherine Applegate.  This book won the 2013 Newbery Medal and it’s obvious when you pick it up why that happened.  Ivan is a Gorilla who lives in his domain at the Exit 8 Big Top Mall and Video Arcade.  Ivan has three companions, a stuffed Gorilla that he calls Tug after his lost twin sister, a dog named Bob who sneaks into Ivan’s cage to snuggle and Stella the elephant who has her own very sad story.  Stella suffers from leg problems that carry over from her circus days when she was treated cruely.  Stella is forced to perform three shows a day and Ivan is on display.  The Exit 8 Big Top Mall and Video Arcade starts to go underwater and the owner buys a baby elephant, Ruby.  Stella is so happy to have a baby to care for, but her health fades and she dies (and her body is dumped into a dumpster with a forklift).  Ivan promises Stella that he’ll find a way to keep Ruby safe and Ivan, who is so very  smart and more than a little bit artistic hatches a plan to get he and Stella out of the Big Top Mall.

I found this book left me feeling very emotional.  Ivan and Stella both recounted the awful stories that led them being taken from their homes and put in captivity.  Ivan and Stella are so easy to relate to and it’s easy to see them in the behavior of other elephants and gorillas.  It’s easy to see Bob in other dogs.  It was just such a well written, lovely (although sad!) story.

Scholastic puts the reading level of this book at 3.3, and while that’s true from a language perspective, I’m not sure younger readers would do well with this book. The interest level is stated as being from 3-5 and I think that fifth grade would be a better age to read this book.  Stella dies.  Her family was murdered.  Ivan’s family was murdered.  Ruby is hit and hurt to try and get her to perform.  It would be tough for a sensitive kid and, admittedly, I cried more than once.

I ended up really conflicted about this book.  The story is about two women; Penobscot Indian Molly Ayer, who is getting ready to age out of the foster care system and who has had a REALLY crappy go of that whole experience and Vivian Daly, a now very wealthy woman who lives in a huge estate.  Vivian and Molly have a lot in common in that Vivian was an orphan as well and made her way west on an Orphan Train when she was just 9.

That’s Littlebit’s age and the fact that this was so common ripped the breath out of me more than once.

The book tells an entwining of Vivian’s life as she winds through three families and Molly’s as she does community service in Vivien’s house.  The problem with this story, really, is Molly.  I’m sorry to say that, but Molly is quite one dimensional and boring and the only reason I really can recommend this book so highly is the telling of Vivian’s story, which I think is really worth reading and thinking about.  Vivian is a wonderful character and her story was enough on its own.  Why am I recommending it?  Even with my annoyance at Molly, I think Vivian’s story was something that challenged me and I think those sorts of stories are always worth reading.

Sonali Deraniyagala’s husband, two sons, mother and father were killed in the Boxing Day Tsunami in 2004.  This story is Sonali’s journey through grief and it is brutal.  But beautiful, too, if that makes sense.

Sonali’s account of the tsunami is very brief, told with the chaos she must have felt at the time. Somehow, she manages to catch a hold of a tree and that is what saves her life.  The story takes about her decent into alcoholism, the harassment of the Dutch family who rented the home of her parents and her slowly trying to rebuild her life without those she loved the most.  I can’t say I enjoy reading books about grief and I certainly don’t read self help books about grief, but books like this one (and “The Year of Magical Thinking” by Joan Didion) speak to me in a way I find I need sometimes.

Free to be Whatever Sort of Mom You Want to be

Free to be Whatever Sort of Mom You Want to be