This year, I bought about 90% of my Christmas gifts on-line.  The percentage has been growing over the years, but the last couple I really didn’t go out to shop at all.  There’s just no need to.  Everything from adorable Christmas pajamas to stocking stuffers can be shipped directly to my door and I can purchase them anytime I have a spare moment.   I don’t have to hide gifts places, they wait in boxes to be wrapped.

But, the boxes.  Oh so many boxes.  Big ones and little ones and medium ones.    We recycle, of course, and our cardboard bin has been stuffed full over the last few weeks, but as the Christmas season drew to a close, we still had a surplus of boxes.  Initially, I thought we’d use them to make a cat house, but I found an idea buried in my  Pinterest.  On Sunday, I called out asking who wanted to do something fun, but maybe slightly dangerous.  Baby Bee was in, Littlebit was pretty sure she was in and the Princess watched from the top of the stairs to make a game time decision. 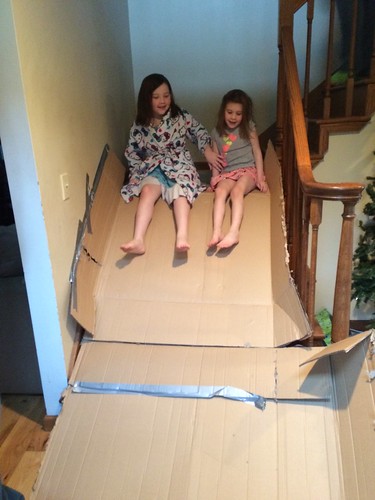 Yes, friends, we put cardboard on the stairs and let the kids use it as a slide.

It’s a pretty easy project; break down a large cardboard box and duct tape it to one side of your stairway. Don’t tape the second side down so you can lift the box to allow people to climb up the stairs for more trips. My hint would be to use a heavier weight cardboard than we did as ours had a lot of give and I don’t think we got quite the affect we would have gotten from sturdier cardboard. 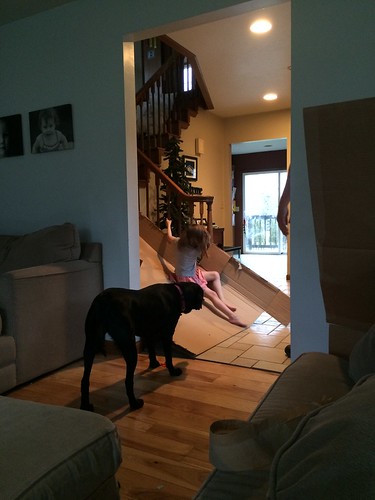 In the end, we couldn’t get it to stay taped the wall and I think we would have been better suited by running vertical strips up the wall instead of trying to tape it horizontally across the top.  But, the little girls used it over and over to slide down the bottom few stairs.  Even the Princess gave it a go.  But, as far as “bang for the buck” goes, it was a free to us cardboard box and some duct tape and most people will have those supplies on hand.  Give it a go on your next rainy or cold day and let me know what your kids think of it.

SHARE:
Pinned There Done That, Tied Up 0 Replies to “Cardboard Stair Slide”