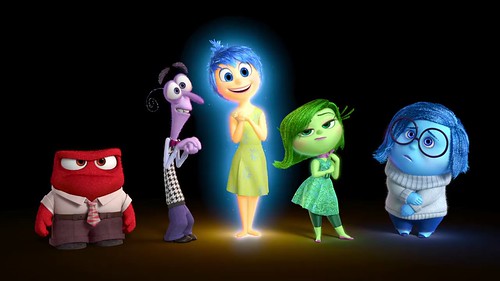 Last night, Big Daddy, the girl and I hit our local theater (on discount day, no less) to watch Disney/Pixar’s newest feature film “Inside Out”.  After spending $60 for the pleasure of watching the film with drinks and popcorn, we settled into our seats to watch the show.

Two hour later, I left kind of speechless and pretty blotchy faced.  Let me tell you why.

Riley is born and when she opens her eyes in the hospital and becomes conscious, Joy is born.  Joy is one of the five emotions that rule Riley from Headquarters.  In time, Joy is joined by Sadness, Anger, Fear and Disgust, but don’t be fooled.  Joy is running the show.  Riley’s family lives in Minnesota, and they’re very happy.  Riley loves hockey and her home and her friends and just when everything seems perfect, the family relocate to San Francisco.  At first, Riley is optimistic.  Joy gathers up the emotions and helps Riley find positive things in a new, sort of ugly house and ugly bedroom and there’s a dead mouse.  Inside Riley’s head there is some weird stuff going on.  Namely Sadness.  She keeps touching stuff and turning Riley’ memories sad.  Joy tries to take over and contain Sadness but Sadness, as we all know, can’t be contained.  She and Joy struggle when she tries touching some of Riley’s core memories and in the scuffle Joy, Sadness and all of Riley’s core memories are sucked into Longterm Memory.

Sadness and Joy are no longer at work in headquarters and Riley is left trying to live life with Disgust, Anger and Fear running the ship.

Depressed folks, does this sound familiar?  Because it certainly felt very familiar to me.

Joy and Sadness go on a pilgrimage to get back to Headquarters and help Riley and on the way, Joy learns how very important being able to be sad is to Riley.  Sadness is just as powerful as Joy.  Only different.

As a Mom, I got really weepy when Riley opened her eyes and met her parents and Joy was born.  Isn’t that beautiful to think about?  And, I cried again when Joy and Bing Bong where were forgotten memories go and all those lovely, happy moments of Riley as a baby and toddler were disappearing into thin air  Wow.  That hurts to think about.  It’s so deep and profound that these happy moments just disappear and are forgotten.  Of course, we know that happens, but it was just moving to see it happen, visually.

But the thing that spoke to me the most deeply was what happened to Riley when Joy and Sadness went away and Anger, Disgust and Fear took over.  Pixar, were you watching my life?  Did the emotions running MY Headquarters reach out to you?  It was depression.  Visual, palpable depression being depicted right in front of me.   I could hardly believe my eyes.  I understood, so well, when Anger grabbed the controls and made bad decisions  when neither Sadness or Joy could be found and I knew what it felt like when everything seemed lost and gray and I felt unreachable.

And, yet, there’s more.  For Baby Bee, naming and understanding her emotions can be difficult and now, she has a visual representation.  We talked the entire way home about who we thought was driving in our Headquarters (The Princess was Two Disgusts, Two Angers and a Joy.  LIttlebit was Four Joys and a Sadness.  Baby Bee was Joy and Sadness and Silly. ;)  I said I was pretty sure Fear was driving me and the Princess suggested that Big Daddy is driven by some Zen Hippy).  Taking emotions and turning them into something real and tangible from an abstract concept is just beyond wonderful and I hope we’re able to consider who’s driving in Headquarters when we’re dealing with each other in our family.

Got kids?  Take them to see this one.  Don’t have kids?  Go anyhow and see how it speaks to you.

A large number of Cinemark movie theaters offer “Discount Day” and we were able to see this new movie for $5/person which is pretty cheap.  Discount Day varies by theater, but you can check your local Cinemark Theater to see when and if you can get a sweet deal.

PS-Cinemark didn’t contact me to say that.  It’s expensive to take 5 people to a non-matinee new release movie, so I included the above link to help you out.  As I explained on my about me page, anything I recommend is purchased for my own use with Big Daddy’s credit card.

More Than One Handful

More Than One Handful

I can not wait to own this movie

It was really wonderful. A new favorite, for sure.

I saw the movie on Saturday with two men and a teenager. We all loved it. Although our experiences of depression were all different, we were all moved, impressed and entertained by it and we all cried. I love that Pixar/Disney created this movie, but frankly it’s about time.

Disney (who I love, by the way, and am an annual pass holder for Disneyland) are finally creating characters their audiences can truly identify with and learn from.

And by the way, thank you for your open and honest blog, which regularly warms my heart and frequently moves me to tears.

Thank you for your kind compliments. I greatly appreciate them.

Disney/Pixar have been making incredible movies for some time and we always look forward to them and love them. I even loved Brave, though not many are with me on that.