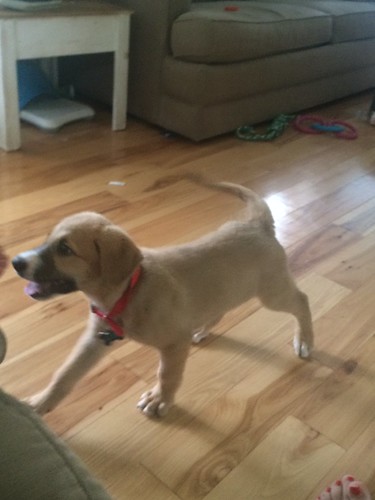 This not so little guy is Atlas.  He’s 12 weeks old and he’s lived at our house for two weeks.

Potty training a puppy is no joke.  I’d rather potty train toddlers. It’s a long, exhausting process that promises a time commitment that rivals any infant care.  Of course, in a few months the puppy will have grown up enough to move out of the challenging infant stage and he’ll be able to hold it and he’ll stop looking at us while he pees on the living room floor. 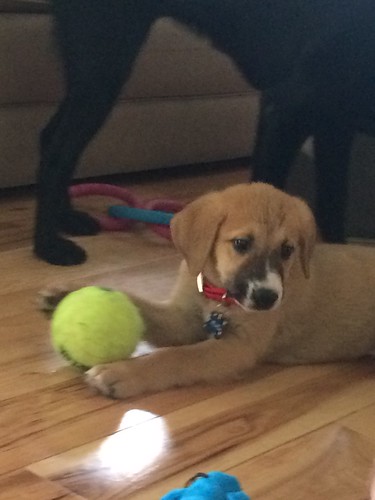 Number 4 was one of the reasons why decided to adopt another dog.  Juno really likes spending time with other dogs.  She’s sad when dog company leaves.  She enjoys going to the kennel because PLAYTIME!   She and Atlas have several, vigorous play sessions a day and while she gets a little jealous our hope is that Juno and Atlas will bond and they’ll both grow to be happy dogs.

If you’re curious, here’s what our non-scientific, barley keeping it together potty training plan for Atlas.

1) Atlas is being crate trained.  Any time Atlas is entering or exiting the crate, he goes out to potty (like a newly potty training toddler!)

2) Atlas is fed and watered at certain times during the day.  Limiting his access to food and water means less accidents.  He eat three times a day.  He is taken out to potty 10 minutes after eating

4) And then we take him out ever 15-20 minutes.  All day long except for the brief periods of “nap time” that he spends in his crate.

Basically, we take Atlas out about 100 times a day.  I think.  Maybe 200.  Or a thousand. It kind of feels like a thousand.  Atlas is already rewarding us, though.  He understands “let’s go outside!” and hurries to the gate to be let outside.  He sits before being given his treat after a potty.  He’s having LESS accidents inside the house (but still probably 10-12 a day which is WAY less than two weeks ago when we had periods of time we took to calling “pee-a-palooza!”).  As time goes by and Atlas’s bladder gets bigger and he has the physical and mental ability to hold it, his accidents will decrease and the work will become easier.

A pet is a lifetime commitment at our house.  There are no backsies.  Atlas will be a 10-15 year commitment if not more.  Over the course of his life, he will cost thousands of dollars in food, toys, supplies and medical care.  He will only be a small puppy (relatively) for a few months.  Then he will grow into a dog and be a lot less fluffy and cute, but we won’t trade him in because we got him for life.  Not just a little while.  Our kids will learn to treat him with respect and care which are important, life long skills and in return he will be loyal, protective and their friend. 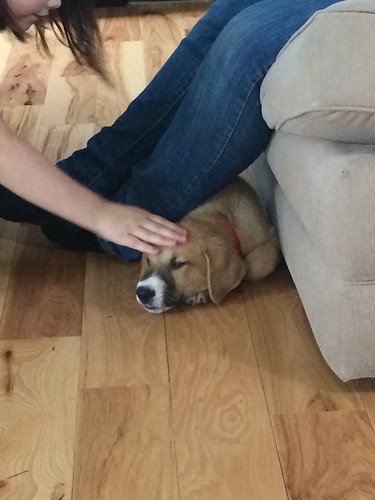 You can stop peeing on the floor any time now.

Forty Before 40: That Time I Gave up Social Media

Forty Before 40: That Time I Gave up Social Media