As I write this, it’s too dark to take a picture, but this week the leaves on our hold out tree have turned brown and the tree is on its way to bare.  We’re moving towards late November and most of the trees have shed their leaves now.  This is the time of year where I usually proclaim that it might as well snow to cover up the dead and brown.  However, we’ve been enjoying an extra long Indian Summer and we might actually need to mow the grass again soon if we don’t start getting some heavy frost.

But, it’s nice to take advantage of the warmer weather to hang up a few Christmas lights in preparation of the coming season (both Christmas and cold) which is what we did over the weekend.  We have a few, final touches to add in the coming weeks, but our display will be simple this year and I’m looking forward to it.

We are down to our last couple honeycrisp apples.  If we had more, I’d have made the apple pie filling for today’s featured recipe from scratch, but it seems a shame to waste it on pie filling, so I’ll eat one this week dipped in peanut butter (which seems like a fitting way to honor the last honeycrisp apple of the season).  We ate 2 bushels of honeycrisp apples this season.  We can get them a little later into the year, but they’re just not as good.

But, enough about honeycrsip.   This is an easy weekend dessert you can call on to use up the last of your apple supplies or just to add a little something special to the end of another fall day. 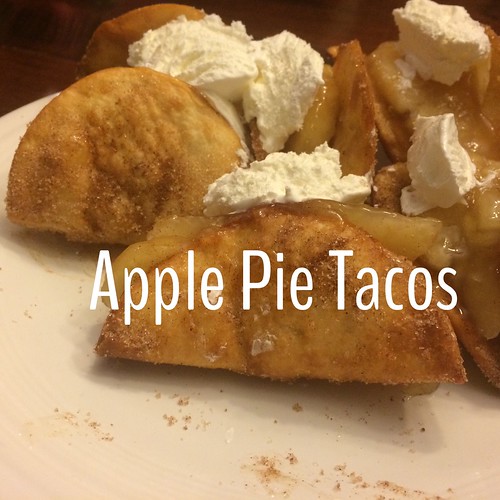 So, the recipe itself is pretty simple, but the folding and timing of the taco shells take a little finesse. My first two, I over cooked and couldn’t fold them when I flipped them. It’s better to err on the side of under cooking the first side and then flipping to allow it to fold.

Also, I allowed my first few to drain completely on a towel and it didn’t allow the sugar to adhere.  I left the rest a little more “damp” from the hot oil and it cinnamon sugar stuck much better. 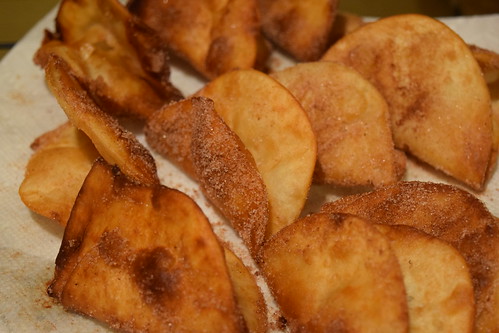 According to the origina recipe, these will keep for days, but I’m not sure about that.  I think the texture of the “tacos” would degrade and that they’re better eaten fresh.  They’re also a little messy, but worth it.
Monday  Chicken Spinach Pasta Bake

Those look fab, reminds me of the Publix Premium Apple Pie ice cream I just had, mmmm!

Thanks for trying out my Chicken and Spinach Pasta Bake and I hope you LOVE it!

We DID like it. I’m not a huge spinach fan, but I had a bag I wanted to cook up and honestly, this dish really didn’t have a strong spinach taste to it at all. Littlebit went back for seconds (Baby Bee wouldn’t touch it, but she doesn’t like her food to “mix”).