When Littlebit was small, Johnson & Johnson made this great product called vapobath.  It was baby bath, but had some menthol or something in it and it was a great addition to a stuffy baby’s bath.  For some reason, you can’t buy this product in the US anymore (but UK folks, it’s a great product and I’d recommend it).  Since the girls didn’t like baths as little ones, I’d dump a couple of cap fulls onto the floor of the shower and hold them until their noses opened up.

I’ve been seeing these pins for Vaprozing Shower Cubes on Pinterest for a while. I’m not going to link to any specific post. I followed several links and the recipe and process is the same and I don’t want to hold someone responsible for my fail.  Most recipes call for baby Vicks, but I bought regular and maybe that made the difference?  Perhaps there’s something in regular strength Vicks that doesn’t work in the superscribed circumstances. I did google to see if it made a difference no one said that it would, so there’s that. 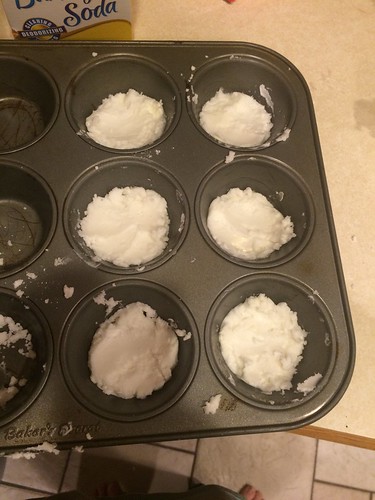 Anyhow, I didn’t have an ice cube tray and opted to make mine in a muffin tin.  It was hard to work with, really sticky and lumpy.  The blog I followed suggested you could pour it in, but I used exactly the amount of water suggested and mine never processed past paste consistency.

And, even though mine was never wet enough to pour, allowing them to dry overnight didn’t net me dry cubes in the morning.  They were still sticky to the touch, so I let them dry another 10 hours.  When it was time to remove them from the tins, well, they didn’t go down without a fight. 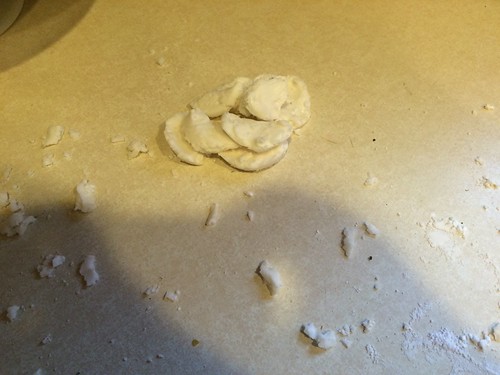 But, I’m not one to let something ugly deter me.  I can use them ugly and decided to take an afternoon shower to give them a try and this is where it gets really disappointing.  I fired up the shower, got it nice and steamy with help from our new propane water heater, dropped my vaporizing shower cubes onto the floor and got in, ready to be assaulted by a lovely, vicks-y steam.

Seriously, nothing.  I moved them around a little bit, trying to get them into a better position.  Honestly, there is more Vicks in the air as I write this in the dining room (and my failed shower cubes rest on the kitchen counter next door) than there was at any point in my shower.  I took several broken pieces into the bathroom with me and when one wasn’t working, I dumped in two more.  Still nothing.  The only thing that ever smelled like Vicks were the bottom of my feet after I tried stirring the cube bits around.

But, I got a second shower so score?

I really wanted these to work, but in the end, save your time and your Vicks.