Something weird happens with second and third babies. You kind of lose track of milestones. When the Princess was a baby I sat on pins and needles waiting and watching for her to meet every single developmental milestone on time. When she was early, I celebrated! She was a genius! When she was delayed, I fretted. Sometimes, I’d like to go back in time and smack that crazy lady a few times. She missed out on so much joy by worrying needlessly.

When Littlebit and Baby Bee rolled around, my life was busier and while I loved them and cared for them every bit as much as I did their sister, I didn’t have the time to worry and fret over development like I had with the Princess. I just had too much going on. When someone would sit up or roll over, I’d often be slightly dumbfounded. I knew it was going to happen, but I sort of forgot about it.  Lest you think that only happens with babies around here, let me assure you that I’ve been pleasantly surprised by all sorts of milestones.

And, this summer  I was surprised again.  Littlebit isn’t much of a little bit anymore.  She’s officially no longer a little kid and has moved into the Tween years.  This past week I made a trip to the book store and picked out the second copy of “The Care and Keeping of You” that will exist in our house.

Can I go on a tangent for a moment?  I know people complain a lot about the price of American Girl dolls.  I understand this frustration.  The Princess was REALLY into these dolls for a few years and that meant purchasing a $100 doll once or twice a year.  I’m not going to talk to you about the quality of these dolls (which, if your child is a doll person is excellent) but I do want to talk about the non-fiction series of books put out by the American Girl corporation to help girls deal with the Tween and Teen years.  I’m a huge fan of “The Care and Keeping of You” volume 1.  It explains in plain language what sorts of changing your girl will beging to experience as she moves from being a kid and into being a teenager.  There is also a volume 2 that gets into more specific information for older girls, but they don’t stop there.  They also publish books on feelings, dealing with drama, dealing with boys, perparing to stay home alone, how to deal with middle school, what to say in difficult situations and more.  So, maybe hate them for the price of their dolls, but if you have a Tween or a tween to be in your house, give them a whirl.  You won’t be disappointed.

Littlebit has read her book cover to cover three times.  We discussed some things that cropped up in the book (smelling and when she may need to start shaving).  We made a few purchases.  I felt a little breathless over how I had missed Littlebit getting older.  She always looks like this, in my head. 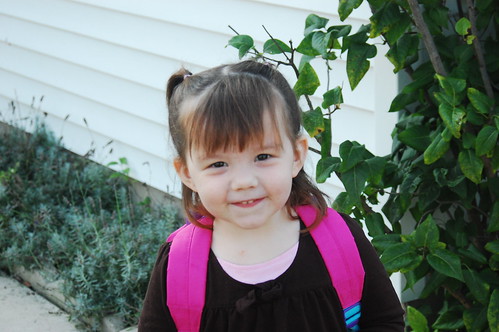 Of course, I know she’s almost as tall as me and her last shoe fitting found her feet to be the same size as mine and her hand pressed against the car window while I was pumping gas last week was nearly the same size as mine..  I know she’s getting ready to head into her last year of elementary school.  I know all of this, but I still didn’t know it. It was still a surprise.  I realize she’s not picking princess things anymore.    I realize it’s been a long time since we watched a Barbie movie together, by her choice (Barbie: A Perfect Christmas is my favorite and I watch it when there aren’t any kids around at all).  She’s staying up later.  We’ve begun to leave her home alone for a few minutes here and there (just 10 total and we have a security system and cameras).   She’s beginning to give a little push here and there.  She’s less willing to do whatever Baby Bee tells her to do.  She’s changing right before my eyes and I’m still surprised to see it.

The Princess’s teen years haven’t been too bad.  She’s a good kid, just mouthy.  I expect Littlebit to even easier as a teen as she’s justa more peaceful, compliant person over all.  I feel pretty confident that I won’t miss Baby Bee moving into her Tween years.  I’m preparing for a fight.

Great Things to Sew: The Vivie Dress by Blaverry

Great Things to Sew: The Vivie Dress by Blaverry