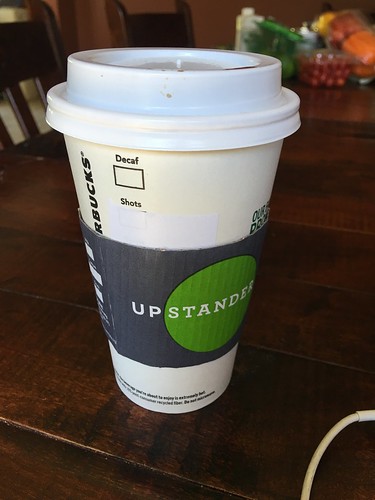 A few times a week, I hit up Starbucks. I don’t go often, like I did when I lived someplace that had a Starbucks ten minutes from my house, but if I’m in the area where there is on, I’ll usually grab a drink on my errands. Typically, I drink non-fat iced caramel macchiatos. At 210 calories (or 9 weight watchers smart points), it’s not horrible occasional treat. It’s not something I could eat every day if I were watching my calories or points (unless I decided to skip meals and I don’t love skipping meals).

Part of my 40 at or around 40 was to reach my goal weight. I didn’t. But, I kicked off year 40 deciding that I had to tackle my weight problem. You know, weight is such a funny thing. I sincerely believe food (and probably sugar) is something you can be addicted to. A lot of people (myself included) use it just like a drug or alcohol. We use it when we’re sad, lonely, bored or even happy. But, it’s probably the hardest addiction to hide from others. Unless you’re addicted to meth (or maybe heroin) your addiction doesn’t play out on your face and body so quickly. You might be able to hide it from others for a while. Maybe even forever. Not so with extra weight.

Anyhow, I’ve been working with my therapist and with myself to get to the end of my weight issues. Not my weight, but the reasons why for the weight. Some I know. Some I’m discovering. I think that’s an important step towards finding (and staying) a healthy weight.

But, back to coffee. I can’t drink a lot of it. I’m super sensitive to the caffeine and I end up having to take magnesium to counter balance the affect caffeine has on me (PVCs). Since I can’t drink coffee every day, I make my weekly coffee count and since I enjoy Starbucks the most, that’s where I typically get my coffee.

Last week, I joined my cousin (and her adorable baby who kissed me, pulled my hair and then threw up on me) for lunch at Panera. I had a half a veggie sandwich and a cup of soup. Fairly healthy for fast food. It was Friday. I’d followed my diet well all week. I decided to have a frozen Mocha at Panera. A rare treat.

Ladies and gentlemen, that drink contained 27 smart points (540 calories). More than double my usual order. I followed it up on Saturday with my fall favorite, a salted caramel mocha which weighs in with 21 points (and 470 calories). I’m not ready to discuss my actual weight yet. I hope I will be soon, but if we look at calorie consumption only, those drinks could have been nearly 1/2 to 1/3 of my entire calorie allowance for the day. My list calorie goal on My Fitness Pal was 1800 calories.

I have a point. Bear with me.

I don’t regret the points/calories I spent on these drinks. I knew they’d be point heavy and I would drink them and enjoy every single drop. And I did. And, they were worth it. But, that meant I had to tailor my points/calories around those drinks for the rest of the day. It meant I had to have fruit for a snack on Saturday instead of a couple pretzels. It meant I skipped having a snack before bed on Friday. It meant I’d used up my extra points for the week on those two drinks. It meant having to be very good and not indulge at the Renaissance Fair the next day. I saved my weekly extra points all week long for those two drinks.

The thing about weight is that the creep is insidious. It comes in tiny fractions. A pound isn’t so much. That extra 500 calorie drink isn’t such a big deal. But the pounds cling together and you don’t tailor your eating to fit your calorie laden drink, you just eat as normal. You have the snack. And then it’s not 500 extra calories, it’s actually 700. Or 1000. And you’ve gained another pound. Or five.

Before, and probably again, I have ordered those 500 calorie drinks. I’ve drank them. I’ve gone on to eat as normal. I never stopped to consider that I had consumed a meals worth of calories in those drinks. I just went on. The 21 points in my mocha is actually MORE than the steak dinner I had later on the day. With potatoes. And butter (13 for that). It was more than the pancakes and bacon I had the next day (also 13 points). It was even more than the macaroni and cheese and popcorn chicken I had last Wednesday by the kids request (14 for that).  The point is, there have been (and probably still will be) times when I didn’t understand my weight gain.  I didn’t feel as though I ate that much.   That is both true and untrue.  But, I can tell you that when I was thinking over what I had eaten, I didn’t think about those drinks.  I don’t drink pop.  I don’t drink juice.  At home, I nearly always drink water.  I don’t like the taste of artificial sweeteners.  But all those drinks.  All those calories.  All that sugar.