For some reason, I’ve had the lyrics of “I Sing the Body Electric” from Fame stuck in my head. I’m not sure if I sang it in choir in 1992 or 1993. We sang it at commencement. I think it might have 1992 and my school might have done Fame as the spring musical. That all sounds right.

But this is a craft project that has absolutely nothing to do with Fame except that “I Sing the Body Electric” mentions stars and we made a bunch of stars and I listened to a bunch of high school choirs singing while I wrote the blog post.

Anyhow, I’ve had this craft saved on Pinterest for some time. They seemed really easy and not too expensive (glue, tissue paper and wooden coffee stirers) but in my neck of the woods, no stores carry wooden coffee stirrers and I had to order them from Amazon. And I bought 500 of them when 100 would have probably more than done.

And since I was already shopping at Amazon, I bought a huge package of cheap tissue paper, so we’ll be sitting on those supplies for a while.

Aileen’s tacky glue does a great job of holding the star frames together. I recommend planning on making the stars a few days in advance. Since the stirrers aren’t perfectly straight or flat, you’ll need to weigh them down sometimes to get everything to actually stick. I’d make five or six stars, weigh them down with kitchen items like olive oil bottles and pepper grinders and once they were dry, I’d assemble another batch.

I only mention doing this in advance because allowing the stars to dry will definitely decrease the amount of time your kids will have to work at the craft and it allows you to deal with the fiddley sticks.

Honestly, this isn’t a craft well suited to younger kids.  Yes, I don’t really have little little kids anymore.  The Princess opted out (which surprised me, because they kind of seemed like her thing) and Baby Bee did two points of one star and noped out of the whole thing.  That left Littlebit and me.

They turned out really pretty! 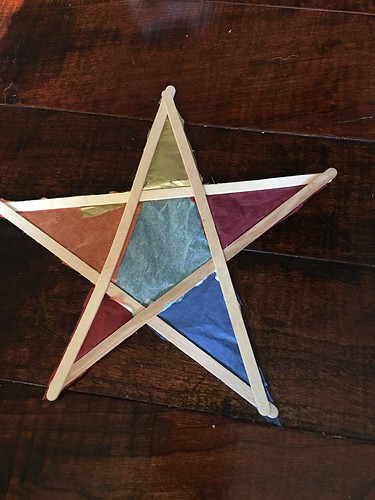 I used a push pin and sewing thread and scotch tape to hang them and they really make a lovely effect, just like I hoped they would. 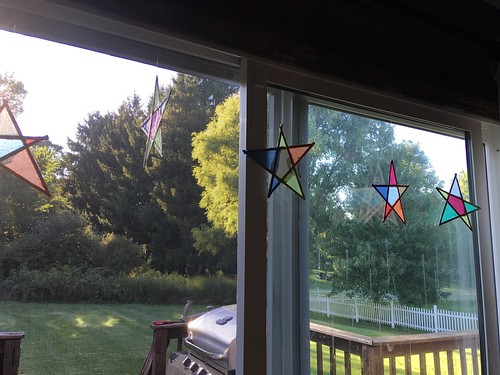