Ah, Hamilton.  For the last four months, the Hamilton soundtrack has been on repeat at our house.  It started with my cousin insisting I listen and on our trip to New Orleans, I gave it the time it deserved on the plane.  I was hooked.  When I came home, I started playing it in the house, all two plus hours of it, every single day.

For a while, the Princess complained about it, but now if I don’t play it, the Princess does.  LIttlebit spent hours this summer watching every Hamilton video that she could get her hands on (Thanks, you tube!) And now, Big Daddy has added Hamilton into his daily rotation as he works or walks.   Hamilton has become woven into the fabric of our lives this year and I wouldn’t have it any other way.

It seems Hamilton has a new lesson for us every few days. We’ve thought about how Alexander Hamilton did something that was nearly impossible. We’ve thought about how extraordinary he was.  We’ve recognized the places where he’s like Big Daddy (really smart, never shuts up).  We’ve gotten misty over the love story between Alexander Hamilton and his wife, Elizabeth.  We’ve cried over their betrays and losses.  Lin-Manuel Miranda,  a genius in his own right, has brought the history of the American Revolution alive in my house and in the homes of many, many others across the United States.

But, there is one lesson from Hamilton that never changes, for us.  A handful of songs into the soundtrack, we meet Alexander Hamilton’s wife and sisters-in law, Angelica, Eliza and Peggy.  I don’t have to tell you that a family with three daughters would immediately connect to a song of feminism and the relationship between sisters, but we did.  The song is an up-tempto dance fest and, it just so happens you can fit the names of our daughters into the song without changing the rhythm .  But, more than that, these women are smart and powerful.  They’re looking, the song says, for minds at work. They want equality.  They want men and women to be equal.

But, I want to talk about Eliza. 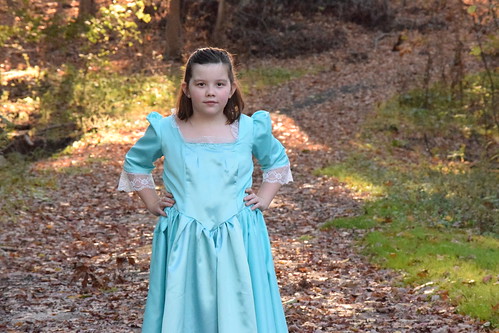 When Littlebit was trying to decide on a costume for this year, she threw around a few ideas, but in the end, we came to Eliza.  Betsy.  Elizabeth Schuyler Hamilton.  Eliza was a remarkable woman.  She grew up in a fairly well educated family.  She met Benjamin Franklin.  She was a tom boy growing up and matured into a strong willed woman.   She was said to not have  a bad temper, just an enduring strength of will.  She bore eight children.  She buried her son, Phillip.  She withstood Alexander’s affair with grace and dignity and after his death, she sought to shore up his legacy, editing his thousands of pages of written work, verifying every claim she could from compatriots.  She was the director of a private orphanage.  She worked to erect the Washington Monument.  She was an abolitionist.  She was amazing in her own right, even without Alexander.  She was loyal. Fiercely.  And, after Alexander died, she didn’t lay down and stop.  She went on, for fifty more years, working in his name and in her own right.

And, as sung in the musical “you will never find anyone as trusting or as kind”.

Who better for Littlebit, fiercely loyal, unwaveringly kind and a little nut brown beauty (as Hamilton described Eliza) to be for Halloween.  Not only was the real Elizabeth Schuyler Hamilton an amazing woman in her own right, she and her sisters are portrayed in a swath of feminist glory in the musical itself.  In our household, we are nothing if not feminist. 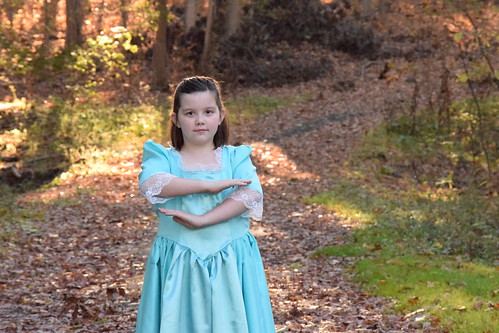 How lucky we are to be alive right now.

So, there was nothing else for my loyal, trusting, kind, nut brown beauty to be.  She spent the summer, enthralled.  She watched three beautiful women, all of them minorities, singing about the importance of equality and the value of a working, useful brain.  Her summer has been steeped in the importance of using your facilities, your mind and your talents, to become something.  She has seen the exaltation of a woman who was brave and strong in the face of incredible storms. She has seen her denounce and then forgive. Eliza is a great role model, not just as she lived, but has Lin-Manuel has written her and as Phillipa Soo has portrayed her.

And, really, you won’t ever find anyone as trusting or as kind. 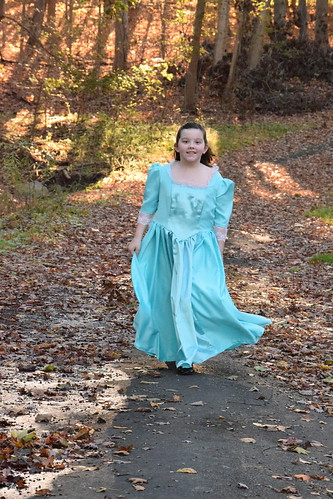 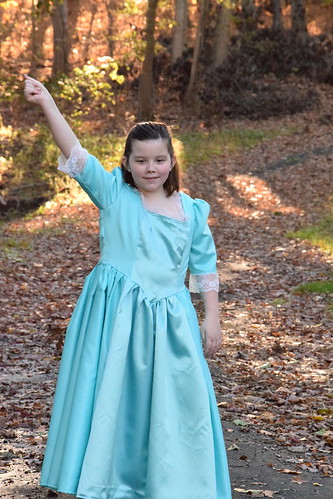 Let’s talk for a brief minute about the cost of handmade clothing and costumes.  Admittedly, I don’t sew for money.  I sew for my family.  If I really like you, I might make you something.  If I do, it’s not because I have cheaped out on you.  Littlebit’s Eliza dress took 8 years of taffeta, 2 yards of lace, two spools of thread and forty hours to create.  The materials and pattern, alone, clocked in at right around $125.  That doesn’t account for a full week of labor nor the yard or so of fabric I used and will discard that allowed me to create a muslin of her bodice to make sure it fit.  If your loved one can create something for you, by hand, or gives you a lovely handmade gift, please don’t assume that they cheaped out on you.  Materials and time means they spent more on you than if they would have just purchased it. 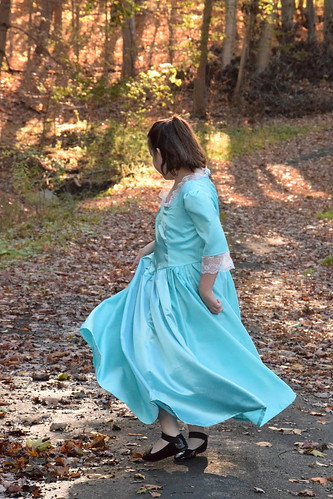 SHARE:
Celebrations, Crafts, The Middlest 0 Replies to “Elizabeth Schuyler, Pleasure to Meet You”