I had to press pause on my Last Diet Ever.  I have NOT given up.  Not at all, but let me tell you a little story.

Once upon a time there was a girl that loved Octobers.  When the hot hazy days of summers drifted off into bright cool mornings and golden-hued leaves, she found herself again.  The frantic energy of summer melted away.  The packed schedule from the transition into the school year slowly washed out to sea.  The girl would wake up in the fluffy duvet in the chilly bedroom with her nose cold and her feet pressed into Big Daddy’s back. 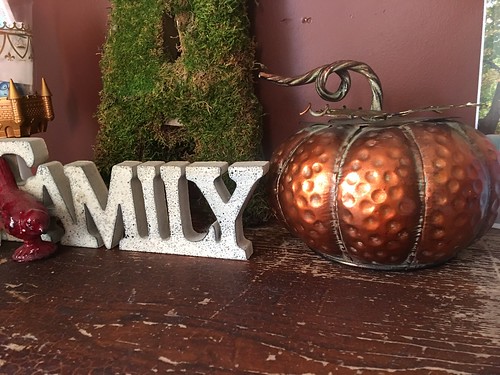 Dinners were soups and stews.  Weekends were crunchy with leaves and orange with pumpkins and red with apples.  But then, one October around the dinner table with gravy and mashed potatoes, her mother dropped the news of the cancer like a bomb. Her fork faltered back to the table.  The sound rushed out of the world.  She went home and cried in the shower, Big Daddy hundreds and hundreds of miles away in Mexico trying to make a go of a new company and a new life and October changed forever.

For many years, October would sneak up on the girl like a thief in the night.  Her anxiety would start to spiral and usually in the shower some morning she would realize that it was just the October Slide and for the first time in days or weeks, she’d be able to catch her breath.  As the years progressed and those 30 months of sorrow and pain and agony and fear got further and further away, the girl was able to see October coming.  She braced herself for the oncoming gales.  She named her fears out loud.  She met anxiety at the door with her arms crossed and refused to let it burst through the threshold and past her into the house.  She got tired of fighting anxiety.  She slept poorly.  She lost focus.  She needed to cocoon herself inside her home and her family and so she did and she would tread water until the October Slide was over.

I had a couple of very successful weeks on my Last Diet Ever in September.  I know that more successful weeks are coming in November and December, but for now, I have to give myself the room to beat my October Slide.

The Sad Case of Having Pinkies