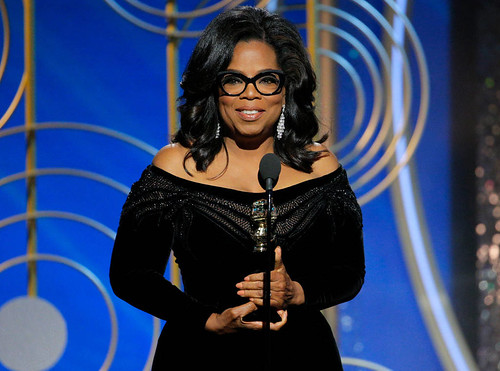 She acknowledged the abuse women have suffered in every SINGLE industry, not just Hollywood and how women had to shut their mouths and tolerate the unwanted to feed their children, have jobs and follow their dreams.  She spoke about Recy Taylor and Rosa Parks and I realized I have more learning to do.

But, there was one thing she said that I know will become a soundbite.  She said that speaking your truth is the most powerful tool we have.

But, that’s not all I want to talk about.

When I was in college, my junior year, I think, I took a literature class (because I was a literature major and I took a bunch of those).  We covered Madame Bovary (hated it), To the Lighthouse (Still don’t get it) and Pride and Prejudice (haven’t stopped loving it).  Pride and Prejudice’s theme is voiced by the very first sentence of the book.  I’m paraphrasing, here, for my own ego but it goes something like “It is a truth universally acknowledged that a man in possession of a good fortune must be in want of a wife”.  We were assigned a paper to write about the theme of the book and I went on a tangent about all the converse appearances of the theme in the book.  That’s what I want to talk about right now.

The opposite of speaking.

Yes, speaking is so powerful. We must pull away the veil that covers , so thinly, hatred  and sexual abuse and racism and misogyny and a million other things.  It is our job, to a person, to stand up for ourselves and to stand up for others, particularly, if we are in positions of power.  Men, for instance, must speak up when they know a co-worker is being forward and inappropriate with women.  White women must speak up when we see minority women not being afforded the same rights and privilege that we are.  Police Officers must speak up against those on their force whom they know to be targeting minorities unfairly.

But, there is another important step to speaking your truth.

You must listen and reserve judgement.

That’s so hard.  I’m a total judger.  It’s so hard to listen with my mouth closed.  I want to dig until I find the truth.  I want to solve the problem.  I want to defend myself, sometimes.  I have to stop myself from saying “not all white people!”.  And, I’ve said that in the past.  My only excuse is that I’m learning and trying and I’m going to fall flat every now and again.  I wanted to comfort people by reminding them that not everyone felt that way, but in the end, I was distancing myself from the problem.

We’re all in the shit now, so we all have to shovel.

When someone spills their heart to you, you must close your mouth and listen.  It doesn’t matter how they’re spilling their heart.  It doesn’t matter if they’re sitting on a couch giving an interview or reaching out to you from a social media post or avoiding your eye over coffee as they tell you their story.  Your job isn’t to judge, condemn or condone.  Your job is to listen.

When you’re done listening, your next job is to think about what you’ve heard.  It isn’t necessarily your job to determine absolute truth, but to realize in that moment and at that time the person who has given their truth to you and that it is representative of what they experienced and how they felt about it.

We are all entitled to feel however about whatever.

Again, I understand the need to correct and help.  I do.  I really do.  When people talk about the brutality of white men, I want to scream from the roof tops “Not Big Daddy!”, but I realize they don’t really mean Big Daddy anyhow, but know that requires I say nothing.

When our children are in school, we teach them to be active listeners.   We ask them to pay attention, to use their body language to show that they’re listening, to reserve judgement.  We need to take a page from our children when people begin to speak their truth.

Now, we’ve come to a point where people are discussing Oprah running for president.  I think the current president has proved, in a way no other has, that really anyone can be president and I don’t know if that’s a good thing.  I’m going with no.  Oprah Winfrey is a truly self-made woman who rose up out of abject poverty to build an empire.  And she doesn’t think she needs to get married to do it.  Would Oprah make a good president?  I don’t know.  But, she’s an amazing woman.