I’ve been sitting on this post for a while. I do that sometimes. Sometimes I’m too far in my feelings for something to make sense. Sometimes I’m trying to describe a bunch of feelings that you can’t easily put words to. Sometimes, I’m not sure if I’m ready to post something I know could be divisive(but, I’d rather be divisive than indecisive, so..).  Sometimes things have to roll around in my brain for a while.

I want to talk about Generation Z today.

Let’s start with me.

I’m a Gen X’er.  LIfe is hard out there for a Gen X’er.  I remember, quite well, sitting in high school and being told that we wouldn’t have social security, we may not be able to retire, there were holes in the ozone (and what were we going to do about that) we’d HAVE to go to college to have a prayer of getting a job that could support our families.

Gen X’ers really never stopped being your Emo cousin that shows up in all black for your family portrait.  We’re not gloomy, we were just defeated at the get go.  The Baby Boomers overwhelmed us.  The Greatest Generation overshadowed us.  We were, and are, saddled with debt, a sickened planet and a gloomy outook.  It’s who we are.  We can’t help it.  We grew up in the midst of cold war and duck and cover.  What did you expect from us?

Some of us got into the parenting game and gave birth to Millennials.  We wanted life to be less gloomy, less “mutually assured destruction”.  We gave out trophies for participating.  We told them that everyone is special.  We told them they were deserving of good things.  And, maybe some of that wasn’t the best idea, but stay with me.

The late Gen’Xers, people like me, got into the parenting game later and we gave birth to Generation Z.  Generation Z is loosely defined as the children born starting in the mid to late 90s and stretching into the mid-aughts.   Experts are still duking it out over what is a Millennial, a Gen Z and what comes next, but  most agree that Generation Z are just now coming of age.

A few weeks ago, on Valentine’s Day, there was a school shooting in Parkland, Florida.  17 people died there that day,14 of them students.  Generation Z.

I have a lot of thoughts on school shootings and violence and why it happens here and not there (there being any other “first world” country we would like to compare ourselves to in the Untied States), but that’s something for another day.

I’m not going to tell you what Rubio said.  You know how it went.

Walk outs are planned across the nation.

Protests have been planned.

Emma Gonzalez, the high school senior with the shaved head that urged her peers to cry out bullshit at the establishment, has 1.2 million followers on twitter.  Emma and her Gen  Z peers are tired of all the crap and I couldn’t be more happy.

When you bring up Gen Z, people are quick to call names or point fingers.  Don’t they eat tide pods?  Yeah, Jessica*, and you huffed so much in the 90s we needed to present our driver’s licenses to buy spray paint.  Let’s not pretend that Baby Boomers weren’t swallowing live goldfish and practicing free love mmmkay?  People are quick to call students who are standing up to politicians and the establishment as rude.

Listen folks, dissent isn’t rude and that’s something you need to get over right now.  There is nothing more powerful OR patriotic then standing up for yourself.  Asking your elected official why he’s taking money from ANYONE isn’t rude.  It’s smart.  It’s necessary.  It’s important.  We all deserve the answer to that question.

My generation?  We were hopeless from the get go.  We were painted pictures of raining nukes and a disintegrating ozone and food shortages and unemployment.    Generation Z just isn’t saddled by that and they’ve been lucky enough to see large social change in the course of their young lives.  We continue to push forward for equality and all these Gen Z kids are seeing it. 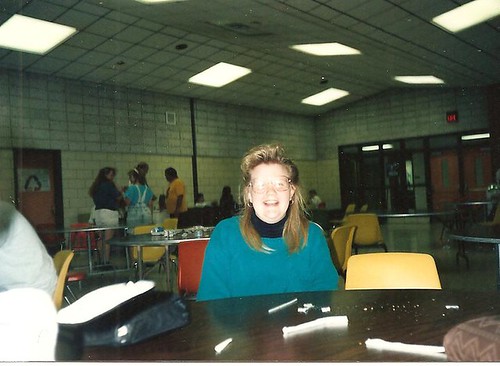 Photo credit to my high school friend Kim who had similarly large hair, but I don’t remember her having the same affinity for turtle necks.

Parents are fighting over who can use which restrooms and the kids are shrugging their shoulders and going on with their lives because they understand in a way their parents don’t that some things just don’t matter anymore.  If we will ever get to a post-racism, post-homophobic, post-xenophobic society it’s going to be the Gen Z kids that lead us there.  They’re going to change things.

So, before you start slagging on kids stop for a while.  Remember the stupid shit you did.  Remember how powerless you felt when you were 18 or 20 and ready to change the world and just couldn’t.  Listen to them. They’re going to fund your UHC some day.

Kids!
I don’t know what’s wrong with these kids today!
Kids!
Who can understand anything they say?
Kids!
They a disobedient, disrespectful oafs!
Noisy, crazy, dirty, lazy, loafers!
While we’re on the subject:
Kids!
You can talk and talk till your face is blue!
Kids!
But they still just do what they want to do!
Why can’t they be like we were,
Perfect in every way?
What’s the matter with kids today?
–Lyrics from “Kids” from the musical “Bye Bye Birdie” originally produced on Broadway in 1960.

*I know of no Jessica’s who actually huffed spray paint. I was going for a ubiquitous Gen X name and and that’s what I got.